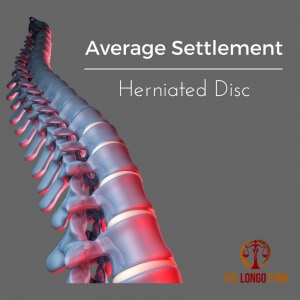 Every accident case is different. This makes answering how much an average herniated disc settlement in Florida challenging. Florida accident attorneys rely on experience and jury and settlement reports.

Here, we’ll discuss what exactly is a herniated disc and how we prove it.  We’ll also look at several actual herniated disc settlements and verdicts in Florida.

What Is A Herniated Disc?

First, what is a herniated disc?  A health disc is a two dimensional round or oval structure having four (4) 90-degree quadrants.  Think of a pizza pie cut into 4 equal pieces.  The discs sit between the vertebra and act as shock absorbers.  A herniated disc occurs when the jelly-like disc material leaves the center of the disc.  The chemicals from the disc can leak out acting as an irritant. This usually causes pain.  A herniated disc can also indent the spinal canal, causing similar problems.  Defense doctors and attorneys often ignore the effect of the chemical irritant.  They claim a herniated cannot cause problems, unless it impinges on the nerve.

Did you know that you may be able to find evidence of a disc herniation by checking your shoes?  Is the wear different on one foot than the other? Is the outside of the show worn more than the inside or there other way around? Are dragging that leg? If so, that can show a herniated disc that affects how and where you place your feet when you walk.

To win money damages you must prove your herniated disc was caused by the accident.  Determinations of causation depend on the timing between the accident and the onset of pain, and a lack of a more probable explanation for the pain.  When these causal elements are met, doctors can assert causation on a “more probable than not” or “reasonable probability” basis.

Over time, a herniated disc will degenerate and lose disc height. The defense uses this fact to argue that your herniated disc is degernative or preexisting. Yet, an MRI scan can’t tell whether the herniated disc was caused by trauma or aging.

Here, are just a few herniated disc settlements and verdicts in Florida.  (Disclaimer: Not be the past results of The Longo Firm or it’s attorneys).

Defense Verdict ($0): Rear-end collision where the Defendant argued that the impact did not cause injury to the Plaintiff.  The Plaintiff first sought medical treatment 5 days after the accident.  She was diagnosed with disc herniations in both the cervical and lumbar spine, which she claimed were caused by the impact.  Defendant argued that Plaintiff’s neck and back conditions were preexisting and were not aggravated or made worse as a result of the crash.  Jury found that the Defendant’s negligence was NOT a legal cause of the herniated discs suffered by the Plaintiff.

$20,000 Verdict: 36-year old Plaintiff was rear-ended by Defendant’s vehicle.  Defendant admitted liability.  Plaintiff’s doctors testified that the crash caused a cervical disc herniation at C5-6.  Plaintiff had a cervical discectomy and fusion surgery. He claimed continuing pain and limited range of motion which hindered his physical activities.  Plaintiff claimed $54,000 in past medical expenses.  Defendant argued that the impact was minor and did not cause the herniated disc in the cervical spine.  Plaintiff underwent prior chiropractic treatment 3-years before the crash.  Jury found Plaintiff DID NOT sustain a permanent injury and awarded $20,000 in past medical expenses.

$35,515 Verdict: Rear-end motor vehicle collision.  Defendant admitted fault.  Plaintiff was a 56-year old man at the time of the crash.  Plaintiff claimed that the collision was significant and caused approximately $5,000 in property damage.  He was diagnosed with a cervical disc herniation and bilateral carpal tunnel syndrome which he claimed was caused by the crash.  Plaintiff underwent treatment in the form of injections and surgery.  Defendant argued the cervical herniation was degenerative and preexisted the date of the crash. Jury found Plaintiff sustained a permanent injury and awarded him $35,515 in damages.

$184,225 Verdict: Plaintiff was injured in a rear-end collision by an 18-wheel tractor trailer loaded with pavers.  Impact was severe and caused a disc herniation to the Plaintiff’s lumbar spine.