Do I Have a Good Slip and Fall Case? 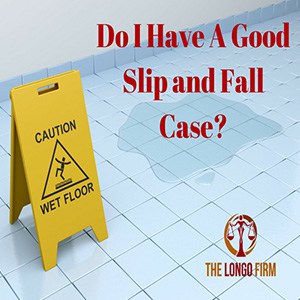 If you slipped and fell because of liquid or some other foreign substance in Florida you’ll need to first prove “notice.” This means that the property owner knew (or should have known) that the liquid or “transient substance” was on the ground. This sometimes can be challenging. For example, if fell because a young child spilled juice on the grocery store floor just moments beforehand, you may not have a case. This is because the grocery store did not have enough notice to clean up the spill.

So how do you prove the store or property owner had notice? First, you need to document what it was that caused you to fall. You do this by taking photographs. In todays world everyone has a smart phone with a camera. Be sure to take photographs of the area where you fell.

If you fell on liquid, what color was it? If its grey and dirty looking it probably existed for a enough length of time the store owner should have known of it. Or did the liquid have track marks? If so, this is evidence that someone else had walked through the spill area – again creating a presumption that it was there for a enough length of time. The classic example they teach in law school is the banana peal. A brown banana peal that is mushy is more likely to have been on the floor longer than a fresh peal.

When taking your photographs also take a wide view shot. Specifically, include photos of any areas where an employee may be stationed. If you fell on liquid close to an area where an employee is located it is much easier to prove the employee should have known about it. Also, during discovery most slip and fall attorney will request information about the store’s spill detection policy. Most stores have a set schedule where they do a safety sweep looking for spills.

Like with every personal injury case injuries are the most important factor. The more injured you are the greater value your case has. For example, a broken ankle is worth more than a sprain or strain. Don’t get me wrong, soft tissue injuries have value, they’re just not worth as much as something more serious.

Here are a few recent jury verdict and settlement amounts involving slip and falls in Florida. (Disclaimer: Every case is different, so you should not expect the same or similar results. This information is intended to be a guide ONLY.  The following jury verdicts were not obtained by The Longo Firm).

$0 – Defense Verdict: 55-year old female suffered a fractured ankle requiring surgery. It was determined by her doctor that she had a 7% whole body impairment. She slipped and fell on a slippery substance at a city owned parking garage. Defendant argued city did not have notice of the slippery substance.

$44,649 Verdict: Plaintiff was hurt at Costco when she slipped and fell due to water on the floor near the flowers. Plaintiff sustained an injury to her left shoulder. Plaintiff alleged Costco negligently allowed water to accumulate on the floor. Costco argued that Plaintiff failed to offer evidence that it was aware or caused the spill. Miami-Dade County jury awarded Plaintiff $44,658.73 in total damages. ($29,658.73 for past medical expenses, $15,000 for pain and suffering).

$65,500 Verdict: Plaintiff contended truck stop negligently failed to clean diesel fuel spill near pumps. After a prior trucker, who was unidentified, overfilled his truck with diesel fuel, a large spill occurred. The plaintiff maintained that the defendant should have been able to clean it before his slipping and falling 15-20 minutes after the fall occurred. The evidence disclosed, however, stated that the plaintiff was aware of the spill, and that the incident occurred after he had walked in the area several times, and that the barrels had been placed to barricade the area. The defendant supported that it takes between one half hour and an hour to effectively clean the area, with an oil absorbent, known in the trade as ” kitty litter.” The defendant maintained that the sole cause of the incident was the negligence of the plaintiff, who suffered a shoulder tear, and required two arthroscopic surgical interventions. He also suffered a sacroiliac, which was addressed by two surgeries. The plaintiff further maintained that he suffered an aggravation of knee arthritis that required arthroscopy as well. The plaintiff maintained that he will suffer extensive pain and limitations permanently and will be unable to work. The jury found the defendant 65% negligent, the plaintiff 35% comparatively negligent, and rendered a gross award of $68,500, including $40,000 for past lost wages, $15,000 for past medical bills, $9,000 for past pain and suffering, and $4,500 to the wife for loss of consortium.

$166,830 Verdict: Plaintiff slipped and fell as a result of grease on a sidewalk in Miami. The county and private corporation operated grills along the sidewalk. County denied actual or constructive knowledge of the greasy substance. Plaintiff was diagnosed with an ankle fracture. She underwent surgery involving implantation of orthopedic rod and screws. Jury found County 50% at-fault and the private corporation 50% at-fault. Plaintiff was awarded total gross damages of $166,840, of which County was responsible for $83,415.

$175,346.95 Verdict: Plaintiff was exiting the salon where she worked when she slipped and fell on tree seeds on a walkway. Plaintiff sustained an ankle fracture. Plaintiff claimed that Defendant was negligent in maintaining the sidewalk and failed to warn her of the dangerous condition. Defendant argued that the condition was open and obvious and the Plaintiff caused her own injury (comparative negligence). Jury found Plaintiff 50% at-fault and sidewalk owner 50% at-fault. The jury verdict was comprised of the following: $165,261.95 in past medical expenses. $3,000 for future medical expenses, $7,085 in past lost wages, and $0 for past and future pain and suffering.

GET HELP NOW
Home » Personal Injury » Do I Have a Good Slip and Fall Case?