Employer Lied About Reason For Termination 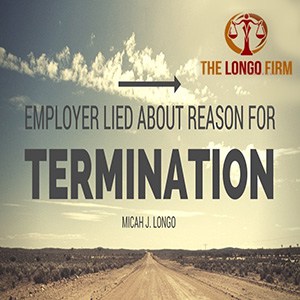 You’ve just been fired, and you’re lucky enough to have the reason why explained to you (hopefully in writing). So, can you sue if your employer lied about the reason for termination? Well, it depends on the “true reason” for your termination, not the reason given by your employer. An employee can be fired for a good reason, a bad reason, reason based on false facts, or for no reason at all. The question is whether it was for a non-discriminatory reason. Reasons like favoritism, mistake, or disdain are irrelevant and may be lawful.

First, it is unlawful to terminate someone because of their race, national origin, age, sex, religion, or disabilty. This is what we call the protected classes. It is also unlawful to reduce pay or transfer employee to an undesirable location because of membership in a protected class. Yet, an employer can terminate, cut pay, or transfer to Siberia for any non-discriminatory reason. To win an unlawful termination lawsuit, Plaintiff must first prove the following:

The burden then shifts to the employer to offer a non-discriminatory reason for the termination or adverse employment action. This can be almost any reason. Most common examples are poor performance or violation of company policy. You can even be terminated for wearing white shoes after Labor Day. Once a non-discriminatory reason is given by the employer, the burden shifts back to the plaintiff.  They then have to prove the employer’s reason is false. In other words, the true motivation is not what they say, rather it is discriminatory. This is a high burden and must be met head-on by the plaintiff.

A plaintiff cannot replace his or her business judgment with that of the employer.  A court will not second-guess the judgment (or lack thereof) of an employer’s business decision. In truth, the judgment of the employer is irrelevant under the business decision rule. As long as decisions were not made with a discriminatory motive, the termination is lawful. This is true no matter how out-of-date an employer’s practices. No matter how arrogant its’ decision process. No matter how mistaken the managers or supervisors.

Plaintiff cannot win by simply disagreeing with the logic of the employer’s reason.  The court will not hear arguement as to whether they are, in fact, a good employee.  Whether a plaintiff’s work was actually poor or whether a plaintiff actually violated company policy is not an issue for the court to decide. The question will never be the correctness of the employer’s conclusion that the plaintiff’s performance was poor, or whether the decision to terminate was fair.  Instead, the court’s only concern is whether unlawful discriminatory animus motivated the decision.

Anti-discrimination laws do not require employer’s needs and expectations to be reasonable.  Like in the above example, one could be lawfully fired for wearing white shoes after Labor Day.  To the average person this doesn’t seem like a reasonable reason for firing someone.  Remember, the law only bans employers from discriminating on the basis of membership in a protected class.  The court will not sit as a “super-personnel department,” and it is not their role to second-guess the judgment of an employer’s business decision.

So, if an employer lies about the reason for termination for the purpose of covering up unlawful discriminatory animus, then the plaintiff likely has a case.  However, a plaintiff cannot win an unlawful termination lawsuit by simply disputing or disagreeing with the employer’s decision or logic.

The best best way to find out if you can sue is to contact a qualifed employment lawyer in your state.